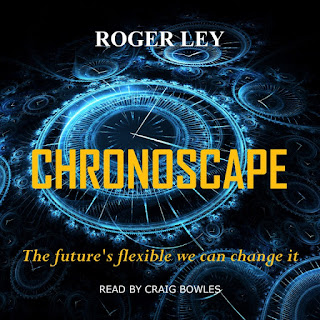 Link to Chronoscape on Amazon

Time. And again. I love it!

Ley produces a riveting narrative in this book. It manages to be fairly straight forward, while being riddled with complexities of choice and events. There is so much at play, I really enjoyed taking the time to listen again. having said that, this is not a "feel good novel". this is a no holds thriller.Chronoscape feels very "un-hollywood", in fact it feels almost indie-British, which is one of my favourite aspects of the book. It is not a spectacle of superintelligence and base evil. It isn't even Star Trekky in its weird timeline but ultimately "good will prevail" mumbo jumbo. Actions have irrevocable consequences in THIS reality. and boy do they take actions.I think (without having a scientific clue, really) that causality, temporal mechanics and the genesis (and long term application) of "time-meddling" are excellently and logically rationalized. it makes sense and offers an interesting break from the usual deus ex machinegun versions of the genre, where all of a sudden base assumptions no longer apply.I appreciate the work which must have gone into developing the motivations of the cast. Particularly the dynamics of idealist scientist, disillusionment, personal conscience, government and -most surprisingly- love !! are themes where this listen had me thinking "what would I have chosen to do?", which is a remarkable achievement in a techno thriller. There is a wonderful mix of dynamics which represent different levels of involvement and getting all those angles is a real "wow" effect. particularly in the late part of the book, there are some VERY interesting life choices which are a delightful listen. (slight spoiler on this at the end)As a repeat serial listener to Ley's novels (otherwise describable as "a fan"), I love the storyline crossover to other books and expansions on thought experiments which are only hinted at in this book, by virtue of the action. to me it feels like being in a series without the all but inevitable "did he not know when to quit" or "oh that old chestnut" pitfalls. Chronoscape has an "inceptionesque" feel, which stems from the time travel aspect, I suppose and I love it. when does something unreal become real? is it really really possible to intervene?Some inspiration from "classics" where the protagonist is drawn into an underground organisation (gangsters, *cough* military government) is evident and skilfully navigated. they are also some of the more ironically humorous passages, as it were.A word on performance:Bowles does a great job of capturing the different eras and nationalities. His way of creating the proper tones, the words' impact, the emotion comes together quite smoothly. I am impressed with his range and with the confidence this is read with. Bowels reading is delightfully clear and smooth. it feels as if there was time to read and rehearse every line, which was absolutely great.listen!listen!Time and again!(***** slight spoiler****one may find an interesting parallel to "better than us" when it comes to some of the dynamics)

Locus Magazine has mentioned my story 'Trackers' which was published in Aphelion ezine in July. The story also appeared in 365tomorrows ezine in August. Click the 'flash' tab at the top of the page to view more published flash fiction
Read more